Gout is a recurring form of inflammatory arthritis that most commonly affects the big toe joint but may affect other joints such as the midfoot and ankle. 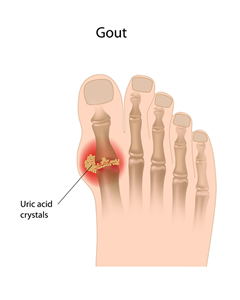 Gout is caused by the build-up of uric acid. Uric acid is a natural substance found in the body and in foods such as organ meats, mushrooms, and anchovies.  The kidneys eliminate uric acid in urine.  A build-up of uric acid can occur if the kidneys do not remove enough of it (90% of gout cases) or if the body overproduces it (10% of gout cases).  An excess of uric acid forms urate crystals which is deposited in joints and surrounding tissues causing pain and inflammation.

Gout usually begins with a sudden onset of pain usually at night. It usually affects one joint, most commonly the big toe joint. Other joints can be affected such as the midfoot and ankle joints.  Symptoms include pain, swelling, redness, and increased warmth to the foot.

Gout is treated with medications to relieve pain and inflammation, such as non-steroidal anti-inflammatory drugs, Colchicine, and steroids.  Your doctor may prescribe medications to decrease uric acid production in your body or to help your body remove uric acid.  Avoid foods that are high in purines and limit the amount of protein from meat that you eat to about 5-6oz/day and avoid drinking alcohol.
Drink plenty of water to help the kidneys eliminate uric acid

Left untreated, gout can lead to advanced gout which is associated with nodules of urate crystals under the skin called tophi and joint damage.  A build-up of uric acid can also cause kidney stones.